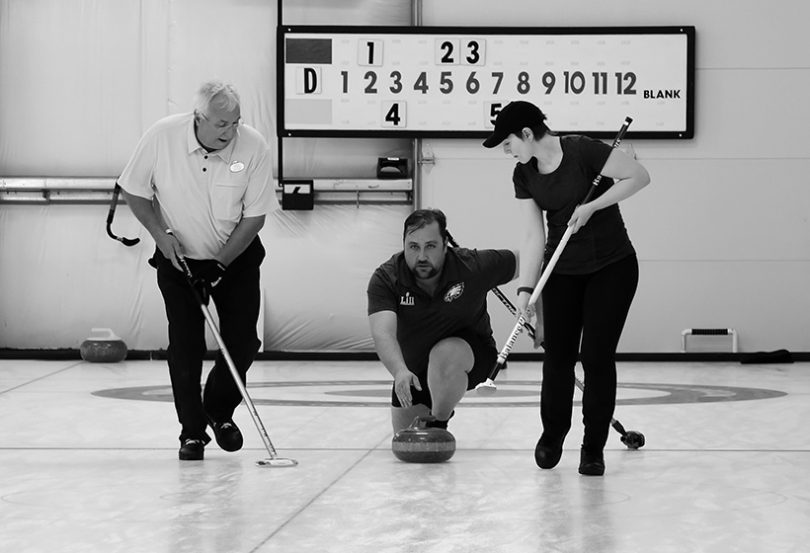 From Bucks County, PA, curler, Dave Schmel, releases the stone, then two sweepers, Brent Larson and Sara Frey, monitor and affect the stone’s trajectory across the ice by using their brooms at the Triangle Curling Club’s Over-Under Spiel in Durham.
PHOTO BY CAROLINE GILMORE

Curling is a sport played by two teams of four players sliding heavy 40+-pound, polished granite stones across approximately 100 feet of ice towards a concentric circular target called the “house.”

Points are scored for the stones resting in­side (touching a line) and closest to the center of the house at the conclusion of each game segment, or “end”. In each end, each of the four players throws two stones; a game usually consists of eight or ten ends. The goal is to accumulate the highest score for a game.

Evidence that curling existed in Scotland in the early 16th century includes a curling stone inscribed with the date 1511 uncovered when an old pond in Scotland was drained. Curling made its Olympic debut at the 1924 Winter Games in Chamonix, and, in 1966, the Inter­national Curling Federation was founded (now called the World Curling Federation).

The rising popularity of the sport, especially on television, was seen during the 2014 Winter Olympics in Sochi. NBC reported more than five million people watched one day of coverage for curling during the Olympics. In the 2018 Winter Olympics in PyeongChang, mixed double curling was made a medal sport. the U.S. men’s team won the gold medal in curling. Gold medals for women and mixed doubles went to Sweden and Canada, respectively. Curling is most popular in Canada.

The term, “curling” refers to the curved path in which a stone slides when the thrower rotates the handle on the top of the stone during its release (or “delivery”). After the stone is released, its trajectory is influenced by efforts of the two sweepers who use brooms to alter the state of the ice in front of the stone as it slides down the playing court or “sheet.” Sweep­ing is done for several reasons—to reduce friction under the stone, to decrease the amount of curl, and to clean debris from the stone’s path.

The Triangle Curling Club (TCC; www.tri­anglecurling.com) is a non-profit organization founded in 1995 to expand the sport of curling in North Carolina and promote competitive curling at national and international levels. After years of using public ice rinks in the Raleigh-Durham area, TCC opened its own dedicated curling facility off TW Alexander Drive in Durham in April 2015.

The TCC facility has four competitive curling courts (“sheets”) and about 200 members. In February 2018, TCC hosted the 2018 US Women’s Curling Association National Wom­en’s Bonspiel. It was the first time the championship had been held south of Virginia.

On an 88 degree September evening, Bob Gully of Durham and I took the “Learn to Curl” class at TCC. It turned out to be the first night the curling season. The lounge area of the facility was warm, but the temperature on the ice was 44. We had been instructed beforehand to dress in loose, warm, athletic clothing, so we were comfortable on the ice. TCC provided us with all the equipment we needed.

Eight groups of four to six students each participated in the class. Gully and I were teamed up with a young couple from Raleigh. Derek Corbett, our instructor, former US Curl­ing Championships competitor and 2012 US Junior National Championships curling champion, went over the fundamentals of throwing the stones.

We set up with our right/dominant foot (for right-handed curlers) braced against a stopper (the “hack”) and placed our left foot placed on top of a Teflon sliding shoe sole (the “slider”). While holding a U-shaped tubular stabilizer in our left hand and the handle of the stone in our right, we learned how to push off from the hack and slide our feet on the ice and then how to release the stone so that it rotates in the direction we wanted it to go. 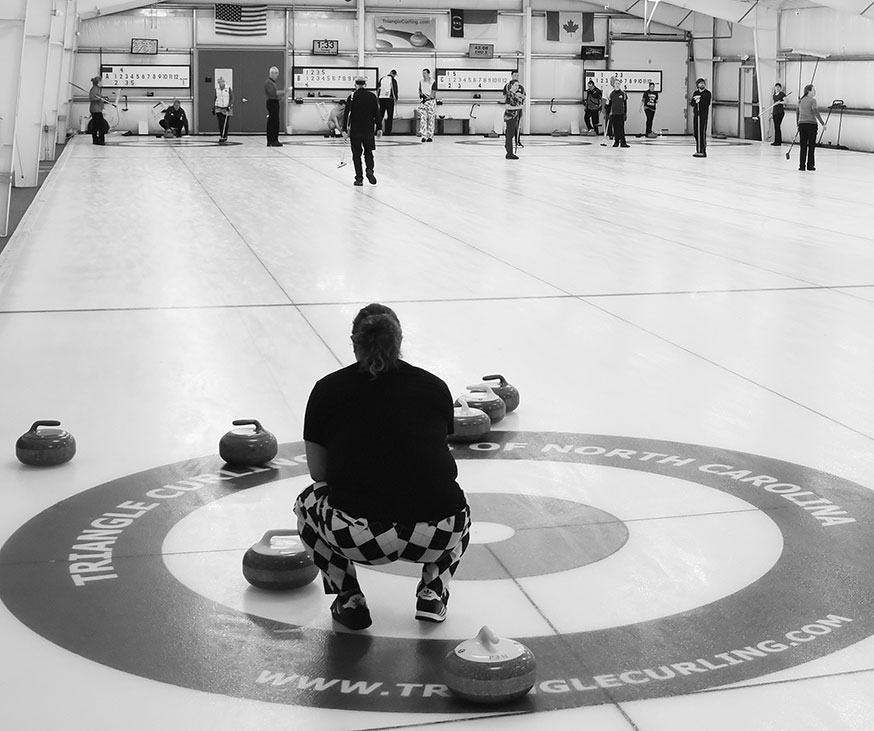 From the Philadelphia Curling Club, Janine Firmender, the “skip” or team captain, provides the overall leadership and strategic direction to the team. The skip shows the thrower, Ian Alexander, where to aim the stone, and directs the activities of the two sweepers during an end at the Over-Under Spiel at the Triangle Curling Club, Durham.
PHOTO BY CAROLINE GILMORE

After several rounds of practice throws, we played two games against the opposing team on the sheet. In this game, each of the four members on both teams threw two stones each, for a total of 8 stones per team. My form and accuracy were good, but all four of my throws in the both games slid through middle and out the back of the “house.” Fortunately, Gully threw a scoring stone in each of the two games; the other team didn’t get any stones in the house, so, thanks to Gully, our team won both games. The thrill of victory! One of the nice things about curling is that the game winners are supposed to buy the game losers a post-game beverage so that there are no losers in curling.

Later in September, I attended TCC’s Over-Under Spiel (spiel is German for “game”), so I could see real curling in action. The goal of this particular spiel (competition) was to encourage people newer to curling to go bonspieling and face opponents with similar levels of ex­perience. Each team consisted of at least two members with five or less years of curling experience and at most two members with more than five years of curling experience.

The competition was fun to watch, with competing teams coming from up and down the east coast. The curling community is friendly and welcoming, and I look forward to curling with the TCC again.