Jordan Lake fishing is off to a fast start this year, considering we did not have much of a winter and the water level is much closer to normal than it usually is this time of year.

High water levels, after a point, can make fishing difficult in the early spring. Depend­ing on stage of the season and the feeding and spawning modes that the fish are in, it’s either the high levels themselves or the drawing down as the weather dries out that gets you. Cold, muddy water adds to your difficulties.

However, most years, some of the best crappie of the season come aboard in February and the biggest bass in March, despite the less-than-picnic-perfect weather. The fishing gradually gets better and better as the water warms and the fish move shallower, to haunts more accessible and locateable to the average fisherman.

This year, the schedule seems accelerated, according to most reports. Not that the fish are in the bushes or on the banks yet, but the fish seem to have been a little easier to locate and in a better feeding mood than is sometimes the case at this point on the calendar.

There’s time for things to change (March snowstorm, anyone?), and there are certainly the perennial spring bugaboos of cold fronts and high winds in the forecast (Who knew?—“Increasing darkness tonight with gradual daylight in the morning … Stay tuned for the latest weather updates.”) but right now you are liable to have good fishing on your first few trips of the year if you are just getting started for the year. It may seem like an early start to some—I have a friend who insists on waiting until April to hit the water—but the evidence says otherwise. Sure, there are some tough days, but the bigger fish and the lighter fishing pressure tend to make up for it. 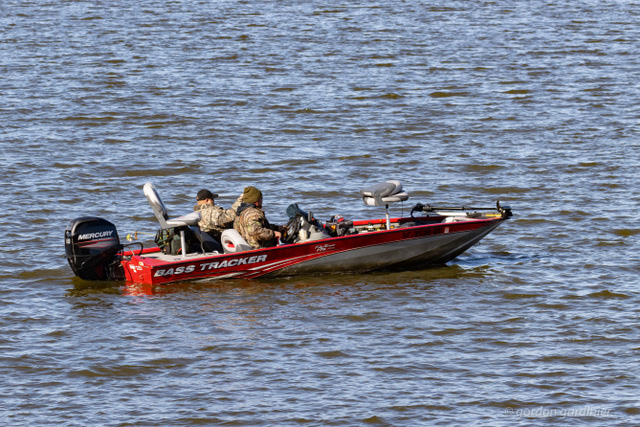 There’s another benefit to starting out on Jordan as early as possible: You get the kinks out of your system well before primetime. My friend, for example, seems always to be fussing with his motor or his electronics during the first couple of trips of the season. I always seem to find something not quite right with my tackle: old line I thought I’d changed; a shortage of some lure, hook or weight I thought I had stocked; a misplaced and temporarily disappeared tacklebox. Wouldn’t it be better, I always ask myself, to start fishing earlier each year, so I (we) can knock out these bits of trouble before the fishing really gets good? Early season fishing is tough enough already—we’re not exactly talking about fish jumping in the boat here—without adding to our difficulties with a lack of preparation.

Speaking of preparation, I’ve talked to a number of kayak fishermen who’ve told me they have a tough time on Jordan in the spring because the lake is so open in most places that the wind makes boat handling difficult. Since kayak fishing is such a fast-growing sport let me say a few words about this, as I’ve dealt with the problem myself.

It’s true that boat handling can take away or contribute greatly to the success of a fishing trip, and there is an art to it. Positioning the boat to put yourself in the best posture to catch and land your quarry is possibly the least discussed important topic in fishing. In kayak fishing, the art is pronounced, especially if your only means of propulsion is by paddle. Strong winds can play havoc with all your best-laid plans and meticulous preparation.

I’d recommend that anglers interested in serious kayak fishing on Jordan outside the summer months look at two things: boats that are built specifically to shed the wind, and pedal or electric power.

These two focuses will make a huge difference in your ability to catch fish consistently from a kayak. You can, of course, try to find areas of the lake sheltered from wind, but you must match those up with where you can launch and how far you can paddle. Selec­ting a better boat for the wind and an alternate means of propulsion will save a lot of effort and headache in getting to the fish, positioning on them, and fishing for them.

Now’s the time to shop for a new kayak and take advantage of on-the-water demonstrations that retailers provide for prospective owners. If your only experience with kayak fishing has been with a paddle, you are probably up for an eye-opener the first time you pedal or power your way to a nice fat bass.

Yes, there is an undeniable charm to paddling a kayak, but a boat that helps you catch fish is not a bad thing.