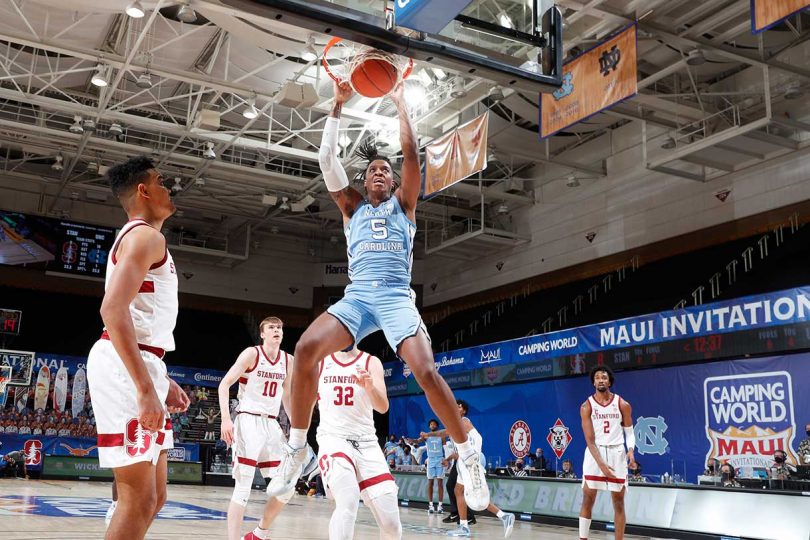 In this truncated (and often-interrupted) col­lege basketball season, the one constant is the collective struggle of the traditional powerhouse programs—the “blue bloods”—UNC, Duke, Kentucky, and Kansas.

In any other year, you would probably find them sitting high in the national polls, somewhere in the top 10-15, and heavily mentioned in conversations of national title contenders. You might find the names of blue-chip recruits, like Jalen Johnson, Caleb Love, Brandon Boston, Terrance Clarke, and Bryce Thompson on the list of candidates for the Wooden Award.

You might even hear discussions regarding Roy Williams, Mike Krzyzewski, Bill Self, and John Calipari as candidates for Coach of the Year. But not this year.

The cancellation of numerous early-season games and scrimmages and the reduction of practice time and training caused by the COVID-19 pandemic has hit these programs more than others because of their reliance on inexperienced freshmen. The model of grabbing as many five-star recruits as possible and building teams around them for one year before they skip to the NBA is not really viable when you don’t have the time to train them, work with them to develop skills, provide adequate team practice opportunities and feedback, and fully integrate them into your program culture and team philosophy.

In this environment, you can’t expect to have a Fab Five, an Anthony Davis, a Jahlil Okafor, an Andrew Wiggins, a Zion William­son or even a Coby White to carry your team. On the contrary, you need leadership from upperclassmen—in essence, you need experience.

Take a look at the teams that are leading the ACC now. Virginia starts three seniors and two juniors, including experienced point guard Kihei Clark, and they’ve all bought into a defensive system Tony Bennett installed over a decade ago.

In Florida State’s 10-man rotation, eight are upperclassmen, including senior lead guard M.J. Walker, and all of them have been indoctrinated into Leonard Hamilton’s up-tempo, smash-mouth philosophy. Even looking at the top two teams in the nation—Gonzaga and Baylor—both have experienced players at key positions, and you can be certain whoever ends up in this year’s Final Four will have the same dynamic.

In any normal year, we might have the same conversations, but the prized freshmen would be a bigger part of them, and we wouldn’t be discussing the downfall of the blue bloods. Of course, it’s anyone’s guess when things will return to a more normal state, or how this will impact recruiting and rostering philosophies in the near term.

But if there’s one certainty in all this, it’s that experience is king in the COVID era, and until that experience can be properly cultured in places like Chapel Hill, Durham, Lawrence, or Lexington, it may be some time until we see the return of the blues.

Remember when the ACC was to basketball what SEC is to football? Analysts would have discussions about whether the conference would garner double-digit bids to the NCAA Tournament. Competition was fierce on the court and the recruiting trail, and the league was widely considered the center of the college basketball world—a true conference of champions.

Fast forward to 2020, where the ACC has clearly lost its standing as the best conference in the land. Its teams are routinely beaten by lower-level non-conference foes, it just lost the ACC-Big Ten Challenge for the second year in a row (and it wasn’t as close as the final tally indicated), and it doesn’t have a single team that ranked in the top 15 or even considered a candidate to reach the Sweet 16.

So, what happened? How did the conference get to such a low state? Here are a few likely contributing factors:

Officiating has made teams soft

The ACC is probably the only conference in which the officials are as recognized and infamous as any of the players or coaches. Ted Valentine. Karl Hess. Jamie Luckie, Rick Hartzell. The names are as hated as any rival, villain, or politician. But it’s the way they’ve called games so tightly and arbitrarily over the years that has led often to poor play by ACC teams whenever they travel outside the conference.

Players are so used to hearing whistles at touch fouls that they’ve forgotten how to play through contact, get aggressive without fouling, and physically wear teams down the way they used to. Now, whenever they go up against a more athletic team, they’re automatically at a disadvantage because ACC officiating has conditioned them to be soft.

Expansion has diluted the pool

In the age of conference expansion, the birth of the Power Five mega-conferences, the television revenue has benefited all schools in­volved. But the degree to which competition has been diluted as a result has left a lot of fans wondering if the effort was even worth it.

Back when expansion started, it made sense for the ACC to poach Big East teams like Virginia Tech and Miami, but venturing into the great white north for the likes of Syr­acuse, Pittsburgh and Boston College only provided company for Wake Forest in the conference basement.

The Orange haven’t been relevant since Carmelo Anthony was in the lineup, the Pan­thers cycle through more players and coaches than the New York Jets, and the Eagles… you’d need a pretty strong microscope to find anything special about Boston College. When you add programs like that, the cream doesn’t rise to the top, it just washes out.

Even haters will agree that the ACC is at its best when Duke and Carolina are both at the top of the polls and among the favorites for the national title. The problem is neither program has been remotely close to that level for some time. Despite bringing in McDonald’s All-Americans every year, Roy Williams and Mike Krzyzewski lately have struggled to translate their recruiting success into competitive relevance, and now both are in a vicious cycle of trying to teach team concepts in the brief period before the NBA poaches their blue chip talent. Maybe Roy and K are just getting too old to keep up with the changing dynamics of the game. Whatever it is, the conference as a whole is feeling the impact, and it may not reach the top again until fresh blood takes over.

ABOVE: Armondo Bacot is UNC’s leading scorer (12.2 ppg) and second leading rebounder (7.4) and has 12 steals and 14 blocks through 18 games. UNC ATHLETICS PHOTO