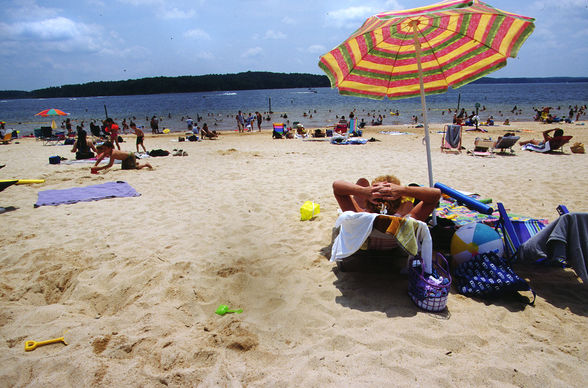 Water safety remains a key issue at Jor­dan. Closely supervise children and be sure they have personal floatation devices (PFDs) when they are in or near the water.

The fourth day use area with a swim beach is White Oak (off US 64) and available to the public when it’s not rented for a private event. It’s usually open on busy warm weather weekends, holidays.

Swimming is not allowed anywhere else at the lake though campers at Poplar Point, Vista Point, Crosswinds Campground can swim at campground beaches.

State Parks tests water quality monthly at all swim beaches from May through Septem­ber, park officials said. In past years Chatham Co. Health Dept. and Clean Jordan Lake Inc. tested the water weekly but that has ended.

Here are suggested precautions to im­prove your Jordan swimming experience:
Don’t swim after heavy rains.
Don’t swallow the water.
Rise off or shower after swimming.

Seaforth, off US 64 on the Pittsboro side of the lake, is the largest swim area with 1,100 feet of beach and normally the busiest. Parkers Creek, across US 64  from Seaforth, is the oldest and smallest, but the swim area is protected from boaters. It has a basketball goal that’s often pictured under water when there’s flooding following big storms.

Pets, alcohol are not allowed at any beach.

Ebenezer is off SR 1008, a few miles from the Wilsonville traffic light on 64. Ebenezer is often quieter and usually the best spot for boardsailing on windy days, with Vista Point second. Vista is the focal point for traditional sailing and the starting point for most swim races and triathlons. Ebenezer has sand volley­ball court, kids playground. Beaches at Ebe­nezer and Seaforth are handicap accessible.

No lifeguards are on duty anywhere and parents are reminded to watch their children closely because the beach areas have differing slopes and depths. Generally, Seaforth has a gradual slope while Ebenezer and Parkers are steeper. All swim areas are marked off by floating yellow markets in the water. Swim inside the en­closed area only.

All public beaches have life jacket trees with infant, child and adult size PFDs. Use them and then put them back. Very few are lost or stolen, park officials said, though some wear out from heavy use.

“People use them a lot,” a park staffer told CSN. But drownings do occur at the lake (one each 2012- 2015, 2017, 2020) and water safety remains a major focus of public agencies like Corps of Engineers, State Parks operating at the lake. Safety awareness signs are in both English and Spanish. Never swim alone. Wear a life jacket when swimming or boating. “It floats, you don’t!” signs warn.

Three drownings were reported so far in 2021—a canoe capsized near Parkers Creek, a swimmer drowned near Moncure and another at Parkers Creek in early July.

Swimming is not allowed at any boat ramp and diving is prohibited from any highway bridge.