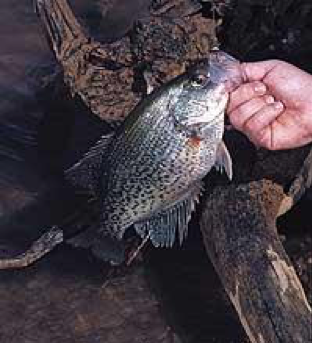 Armed with extra-long specialized crappie rods, “doodlesockers” put baits right in the fish’s living rooms. Follow along as top pros share with us tips gleaned from years of employing this highly effective technique.

No matter what you call it—dabbing, dab­bling or doodlesocking—many professional crappie anglers agree on one thing: It’s the most efficient way to catch springtime crappies from flooded brush and shoreline spawning beds.

The technique’s simple. Use a 10- to 14-foot-long pole with a length of light line to drop a bait right down into the brushy, weedy structure that crappies love in the spring. It’s precise, it’s quiet, and it’s absolutely killer for crappies—if you know when, where and how to do it. Three professional crappie anglers offered a few tips on how they make doodlesocking work for them.

Phil Rambo, who follows several of the major crappie tournament schedules, takes doodlesocking poles to every tournament he enters. He has 10-, 11- and 12-foot-long rods; of these three lengths he prefers the first rigged with a simple spincasting reel spooled with 8- or 10-pound-test line.

“Doodlesocking is my favorite way to fish for crappies in the spring when a lake is higher than normal,” said Rambo. “It works from a boat, and it works from the shore. Trying to cast and retrieve jigs or minnows into flooded weeds and brush along a shallow shoreline, you’re just going to snag up. With a long pole, you just lower your bait right down into all the brush and lift it back out.”

Rambo prefers a 1/16-ounce minnow-head tube jig but may use a 1/32-ounce jighead if the crappies are biting sluggishly. If, however, they’re aggressive, he’ll tie on a 1/8-ounce jig.

“The 1/16-ounce jig lets me feel what I’m doing, so I can literally walk it down a branch or along a log,” he said.

“The 1/32-ounce jigs fall more slowly, so they’re good when the fish are finicky and need more time to look at it on the way down. But if they’re really on a bite, I’ll switch to a 1/8-ounce jig just so I can get it down to them faster.”

During the peak of the spawn Rambo uses tube jigs alone. When fish are more selective, he adds Berkley Crappie Nibbles to his tube jigs. When crappies become indifferent, he tips his jigs with lip-hooked minnows.

“It’s all about time,” he explained. “If they’re biting fast, a plain old tube jig will get you back to fishing faster. Crappie Nibbles are good when they’re a little more picky, be­cause you can usually get a couple crappies off each Nibble before it comes off. Minnows are al­ways good, but they rarely last more than one bite, so I only use them if fish are biting slow.”

Rambo’s final tip for amateur doodlesock­ers: “My dad used to fish from shore with a long bamboo pole, and before he’d even bait up, he’d walk along the shoreline and use the tip of that bamboo pole to lightly smack the surface of the water where he intended to fish. He said that crappies were inquisitive fish, and that lightly smacking the water drew their attention. All I know is he used to catch lots of fish when he did it.”

“I love to go back into a bay or cove during the spawn and see a solid mat of floating twigs and stems and leaves,” he said. “Crap­pies feel really comfortable under that stuff. I’ve caught crappies from as little as a foot of water under that floating mat.”

“Other times, if there’s a little more depth under the mat and I’m not as concerned about spooking them, I’ll wind the jig up tight against the end of the rod, then use the tip of the rod to gently clear a small hole so I can drop the jig down through it.”

To his 12-foot-long B’n’M crappie rod, Cole­man attaches an old Ambassadeur 25 reel loaded with 6- to 12-pound-test line—Berk­ley Trilene XL, extra-abrasive—that’s rigged with homemade leaders 2 pounds lighter than the main line. “That way, if I snag up I can break off, hook on another pre-built leader and get back to fishing right away,” he explained.

Coleman usually tips his jigs with 2 1/2- to 3-inch minnows. “I think guys often use too small of minnows,” he said. “One time I cut open a bunch of 1 1/2 pound crappies to see what they were eating. Every one had balls of rolled up shad stuffed into their stomachs.

“When I unrolled the shad, they were up to 5 inches long. That taught me that crappies aren’t intimidated by big minnows. I think I’ve been averaging bigger crappies since I started using bigger minnows.”

Bert Bennett has a secret weapon when he uses long poles to doodlesock crappies: his 13-year-old-son. “Brandon’s been fishing crappie tournaments with me since he was seven, and he seems to have a knack for doing the right thing to catch crappies, even if it seems wrong at the time,” Bennett said, laughing.

Many crappie anglers disdain fish attractants or flavored bait; the elder Bennett used to be one of them. At one tournament, young Brandon, 7 years old at the time, got bored and began toying with some fish scent that had been distributed to all the entrants.

As might be expected, he managed to spill the attractant on the boat’s carpet. On a whim, he rubbed his jig on the fish-flavored carpet. “He long-poled that jig down into a brushpile and caught the fifth-biggest crappie of that tournament,” his dad recalled with a chuckle. “When he began outfishing me by rubbing his jigs on that smelly chunk of carpet, we dug around to find the scent and used it for the rest of the day.”

Since then, the Bennetts have reached the conclusion that flavored baits are never a disadvantage and often an advantage. Young Bran­don is particularly fond of Berkley Crappie Nibbles and uses them most of the time, while his father experiments with bare tube jigs and jigs tipped with minnows.

“Some days they don’t make a difference,” said the elder Bennett. “Some days he whips me bad.”

The Bennetts generally use 10-foot long poles for doodlesocking, but they pull out the 12-footers to avoid spooking crappies in shallow water if the water is clear. Their jigs are usually 1/16 ounce, but they’ll go up to as much as 3/8 ounce if they’re probing brushpiles in up to 30 feet of water post-spawn.

During the spawn, when crappies are in shallow bays and coves, the Bennetts look for changes in shoreline structure. Transitions are the key: If the shoreline is flooded weeds, with a pocket of willows, they’ll fish the edge between willows and weeds.

“We were fishing a tournament where there was one bay that was solid flooded willows,” recalled Bennett senior. “We found a spot where one of the willows had blown over. We fished that one blown-over willow and took out enough 1- and 2-pound crappies to get us 13th out of 148 boats.”

The Bennetts use large jig hooks to avoid tearing out the papermouths’ mouths as the fish are hoisted vertically from brushy cover when doodlesocking. “We rarely use smaller than a No. 2 hook,” he said. “If you use a big hook you’ll tend to hook them behind that papermouth and lose fewer fish.”

Their final tips for novice doodlesockers: Move deliberately; fish precisely. “Every lake we go to, there are always some older local gentlemen in straw hats and bibbed overalls with a cooler full of slabs,” Bert Bennett of­fered in conclusion. “They may move slow be­cause they’re old, but that slow speed is probably what helps them catch so many crappies.

“That’s the key to doodlesocking. Move slow, fish every inch of structure, and you’ll catch more crappies doodlesocking than you could ever hope to catch if you were casting a jig in that heavy cover.”

The next issue of CSN will highlight Sum­mer Cycling including E-bikes, where to ride mountain bikes, group rides, races, area bike clubs. Publication date is in June (TBA). To advertise call 919-968-8741 or email joelcsn1 @gmail.com. Fun at Jordan Lake follows in July and Fall Running/Hunting in August.