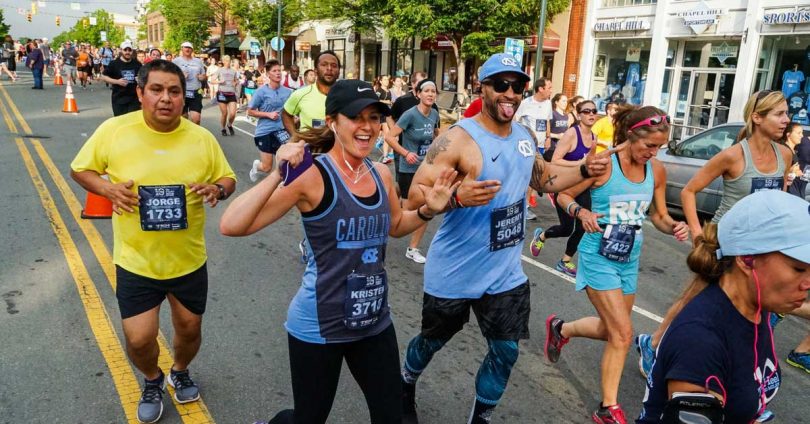 Looks like the Tar Heel Ten Miler/4M in Chapel Hill, the largest local spring race, is off the table for 2021 due to the pandemic. It also was canceled in 2020. Capstone Event Group of Raleigh, who produces the race here, hasn’t done any races since December 2019 due to
Covid 19. PHOTO: TH10 FACEBOOK PAGE

Live in-person spring road races are few locally due to the Covid-19 pandemic. Some races went virtual, others were canceled or re­scheduled and still others haven’t been heard from.

Last year CSN had 25 Chapel Hill-Dur­ham races listed for March and April before the pandemic hit. This year there are about five or six scheduled at the moment, several of which are new.

There are obstacles to races all over the place—the governor’s gathering limits (100 outside), approval by campus, city and county authorities, volunteer needs and it varies widely.

For example, Raleigh banned all events like races and festivals through March 31.

“We continue to monitor the situation and have not yet made a decision on extending or rescinding the ban,” said Sarah Heinson of the City Manager’s Office. “Any decision will be based on the Governor’s guidance regarding large outdoor gatherings.”

Fit & Able Productions and Precision Race are doing small races in Cary. Each developed special safety protocols for their races.

Bruce Bokish of Precision said their “Safer Time Trial Style” racing is meeting with success from race directors and runners.

“Our race format is an interim step to keep racing alive. We agree that as more and more people are vaccinated and restrictions are eased by the government, racing as we remember it will gradually return. The large commercial race series may be the last to return to full strength because of the liability risk their deep pocket investors may be concerned about.” Precision has upcoming races in Cary, Green­ville, Durham.

Jason Biggs of FS Series, Raleigh, said, “We did launch the Harris Hustle 8K Feb. 27 at Harris Lake CP, New Hill. We are working to do an event per month somehow to keep momentum going.” They did a January trail race at Harris but could only have 50 people in the park at a time. They had four starts around 1:30 apart.”

Chapel Hill/Orange County is perhaps the most cautious of local authorities and has approved few events. Plans for Blue Blood Rivalry 5K in March, for example, were turned down by UNC so no race will be held in 2021. The 2020 race in Durham was canceled.

Some race organizers remain on the sideline, waiting on Covid data and state rule changes before setting a race date, rather than having a date and later having to change it.

Capstone Events, which does large spring events like the Tar Heel 10 Miler in Chapel Hill, hasn’t put on a race in more than a year as they need state gathering limits to be adjusted. They need large events. Website says date TBD.

Observations: Local runners apparently aren’t doing as many out-of-town races as previously. Races at the coast and in the mountains, tourism focal points, are picking up, while races in the Triangle and Piedmont are limited but holding steady.

Nonetheless, runners here wait and hope for case numbers to drop further, more folks to get vaccinated and then maybe government restrictions will be eased and local races wll resume.