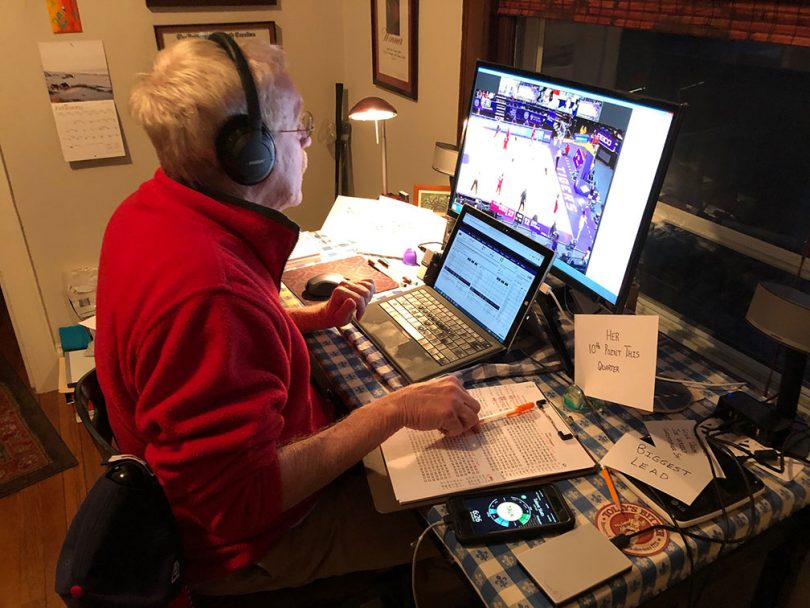 Freddie Kiger of Chapel Hill works remotely on a women’s basketball game in Knoxville, Tenn., doing stats and communicating with announcers, producers, tech folks scattered across the country for the ESPN broadcast. He has lots of electronic gizmos to help him communicate. PHOTO BY KAREN McCALL

ESPN master statistician Freddie Kiger was a familiar face at the scorer’s table at the Smith Center for UNC men’s basketball until Covid 19 disrupted sports and broadcasting. Now everything’s different.

This season he’s worked a mixed schedule of games remotely from home, solely at arenas and at a table rows above the court at the Smith Center, Cameron Indoor, PNC Arena. He’s done men’s and women’s games for the ESPN family of networks like ACCN and Raycom-contracted contests.

For arena games he has to get covid-tested several days in advance, send the sample to ESPN’s testing lab contractor and hope the results are okay so he can work. His test results were fine but he, like many schools, lost games to covid and contact testing when they were canceled.

He works part-time and normally does 75-77 games a season. This year it could be half that many. He worked both the women’s and men’s ACC Tournament in Greensboro in person because they’re packaged events and may do more basketball games, college baseball, softball, field hockey, soccer in coming weeks.

Kiger passed on going to Texas for NCAA women’s tournament games in San Antonio March 21-April 4. “I thought about it a lot and decided for various reasons to pass on it for this year,” Kiger told CSN. And his decision was before the governor ended the mask mandate and eased business restrictions despite warnings from health authorities.

The pandemic forced their hand and the network shifted to one of three broadcast mod­els—fully remote, regionally-engineered (REMI) where the announcers, producer/direc­tor are off site and campus broadcast facilities are used and package (the Full Monty) with an ESPN production truck and full game crew at the game.

Prime-time games like UNC/Duke, Kansas/ Oklahoma, ACC Tournament get the package treatment including plenty of pre-game promos and buildup.

Working remotely is challenging. “You’re at the mercy of the IT gods,” Kiger said, “if something breaks down.” He watches the game via Zoom, listens to the announcers on headphones, does game stats on his computer (the official scorer is at the game site) and notes additional stats, trends on a clipboard where there’s lots of game notes furnished by the participating schools. He sends info to the producer, graphics person and can contact the announcers directly.

When you hear the announcer say a player had a career high in rebounds, points, double doubles, or see it appear on the left side on screen during game action, you’ll know where the information came from.