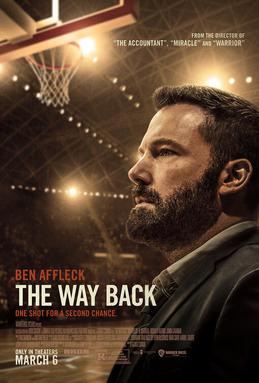 The more I think about “The Way Back,” the less I like it. It is a sort of mash-up of two genres, and they do not mesh well. First, it is the formulaic come-from-behind basketball team of little scrappers, who, under the guiding hand of a good coach gain confidence and become winners. Everyone loves this genre. Entwined in it is the tale of the self-pitying, disappointed with himself alcoholic, who has lost it all and given up. “Hoosiers” with a bit of “Days of Wine and Roses.”

In this case, the team is the Bishop Hayes High School club. They have had no success since the mid-90s, when Jack Cunningham was their star. He won every award and got a full scholarship to Kansas State. His talent was endless.

Jack Cunningham, played by Ben Affleck, however, never went to college, falling into drugs and alcohol instead. Now he works construction, nimbly climbing up tall structures and balancing on slender beams. Quite an ac­complishment for someone who drinks about a case of beer each night and carries a thermos of gin around with him at work.

As we can all guess, Cunningham and the team meet. The head of Bishop Hayes calls on Jack to take over the season when the former coach has a heart attack and cannot return. The assistant coach, Dan, played by Al Madrigal, who has no funny lines in the movie at all, is the assistant. He is also the algebra teacher and takes care of a disabled relative, so he is no candidate to take on the head coaching job. The team has ten players. Well, actually six. They have had to draft a football player and bring up some of the junior varsity to fill their ranks.

With hard work, the team gradually shapes up. They start winning. Apparently Jack stops drinking somewhere along the line. His patient friend Doc (Glynn Turner), no longer has to walk him home from the bar and pour him into his grubby apartment. It turns out that Doc did the same for Jack’s late father.

While the team continues to improve, Jack becomes somewhat more involved with them. I do not think Affleck ever really changed his facial expression during the movie, but he seems to like his point guard, Brandon Dur­rett, (Brandon Wilson) and does his best to help him. Jack teaches Brandon to raise his voice, to be more aggressive. “Why is it so hard to believe you’re the best player on the team?” he asks Brandon. Brandon rises to the occasion.

Jack also tells Brandon that he did not take the college scholarship because his father had never really loved him, but Jack discovered that his basketball success makes his father proud and made him like Jack. Therefore, Jack concludes that his father did not love him, but only what he could do. Wait a minute. So, armed with that insight, Jack proceeds to destroy his chances in the world of basketball? To me, that does not compute.

Brandon has started to receive attention from college scouts, and his father is dead set against his son “relying” on basketball to define his life. Brandon’s dad tried that; it did not work out.

Meanwhile, Jack kicks Marcus Parrish (Mar­vin Gregg), his tallest player, off the team for being 4 minutes late and arguing with Jack. This bit of drama does not really fit, but then neither does the part where Jack takes Marcus back after Marcus mumbles an apology. These scenes may be intended to show growing empathy and awareness on Jack’s part. Or maybe they are just in keeping with a genre trope.

In the other half of the plot line, Jack interacts with his sister Beth (Michaela Wat­kins) and her very nice family, showing minor jealousy at her apparent success in life. She would like him to go into rehab; he will not. Jack also tries to reconnect with his wife Angie (Janina Gavankar) but this attempt does not work, in part because she has found someone else and in part because of a major trauma that had blighted their marriage.

Gradually, we learn what the trauma was. Jack is reminded of it by a similar incident which happens to occur during the league playoffs.

In the basketball world, the playoffs go well. Bishop Hayes beats its richer, more confident rival. The typical rival, last seen gnashing its collective teeth as the plucky Hayes team wins. Brandon’s father comes to a game, sees his son excel, and gives Jack a hearty smile. So there is hope for a college career for Brandon. (But wait, isn’t this sort of Brandon’s father only loving his son for what he can do?)

But before the final game, Jack has gone off the rails again. A late night drunken hook-up with Diane (Rachel Carpani) turns to disaster. Jack is fired after he shows up hung over at school. Nonetheless, the players run onto the court for the final game yelling “Let’s win for Coach Cunningham!” Shades of George Gipper.

And in the end, the championship is won. Jack is checked into a rehab facility that looks more like someplace Ben Affleck could afford than Jack could. He is working through the trauma that ended his marriage. We see him shooting a basketball on a deserted court overlooking the shining sea. He has hope.

A couple of notes: Reviewers loved this movie. Not a disparaging word in anything I read. It is showing on Amazon Prime; don’t let me scare you from watching it. Also, there must have been some late editing done. Dan Lauria is listed in the credits, and a woman actor is listed as his wife. The only traces of Lauria in the movie are in two crowded bar scenes. I do not think he has any lines.

The next issue of CSN will highlight Sum­mer Cycling including E-bikes, where to ride mountain bikes, group rides, races, area bike clubs. Publication date is in June (TBA). To advertise call 919-968-8741 or email joelcsn1 @gmail.com. Fun at Jordan Lake follows in July and Fall Running/Hunting in August.