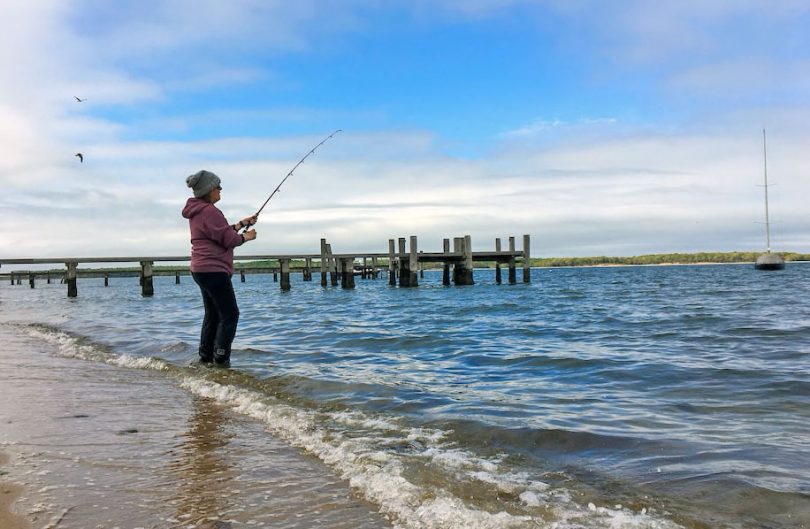 You don’t really know how to fish, but for some reason you have been doing it a lot during the pandemic. Maybe it’s because there’s no contention in fishing. Because you never catch anything, the only real fight is between you and the gear, the struggle not to bury a hook in your own earlobe. There is no noise in fishing, either. The anxious, care-ridden guy who owns the local tackle shop tells you, “Fishing is the only time I sleep anymore.” That rings true, you find.

You have developed a growing fascination with lures. They jingle happily when you walk, like spurs. In the local tackle shop you fiddle with treble hooks, spinners and spoons, with barbs so sharp they look like Death’s own scythe. You like lures for the same reason you’re drawn to fishing in general: because of the small-fingered competence re­quired. You learn to tie a tiny braided knot that slides along the monofilament, with such concentration that it blots out the news, narrows your mind to the thinness required to handle the split-ring pliers without pinching your thumb.

You begin to obsess on fishing reports. In them, you discover a whole new language, one that pleases with its lack of stridency. You read fishing reports from everywhere, places where you don’t live, will never live. Lakes in Michigan. The coasts of the Carolinas. Trout streams in Colorado. The reports make words dance like the lures in the water.

At first, your bouts of fishing are futile and frustrating. You throw a line under an old bridge, a dank graffitied place where water swirls around old pilings. The line gets caught after a few hasty casts. You spend most of the time trying to free it, jerking and hauling. You don’t catch anything—not a thing. Your reel gets so tangled it looks like an interstate map.

“How many times did you cast?” the spouse asks.

The spouse thinks about this and says with a smirk, “So it’s kind of like gambling.”

The guy who writes the local fishing report lives just down the street, and you start to ask for a lesson. He has a boat and a fish finder. But you don’t. For the same reason that you don’t take your tangled reel into the tackle shop: because it would feel like a kind of personal disgrace. Something tells you fishing should be a figure-it-out-for-yourself business.

It has become a personality test, fishing. As you scan fishing literature, you must ask yourself, “Are you a cutter or an untangler?” When the line is tangled, do you work pa­tiently at the snarls or just cut it away? For most of your life you have been, you must ad­mit, incontrovertibly a cutter. You should do things a little differently, maybe. Maybe instead of cutting you could become more of an undoer. An unwinder.

You begin to think the great fishing writer John Gierach is right. He once wrote, “It’s not even clear if catching fish is actually the point.”

He also wrote, “Creeps and idiots cannot conceal themselves for long on a fishing trip.”

You envy real fishermen. Sometimes you watch them more than you actually fish yourself. You live in a place known as the East End, which is exactly what it sounds like, an easternmost tip of land. Up the road there is a point of black rocks where the North Atlan­tic roars in with waves like white-crested dragons that take huge bites out of the cliffs. The beach is layered with storm-driven rocks, and if the current got ahold of you, it would take you straight to Portugal. As Michael Caine says in the film “Deathtrap,” which was filmed in this locale: “End of the line. Bloody symbolic.”

The rocky foaming headland is bare ex­cept for an old lighthouse, scenery that reminds you of Longfellow’s phrase about the Amer­ican continent: It looked “as yet untouched by history.” You sit there and watch the real fishermen, surf casters in chest-high bibs with studded wading boots. They brace as the green-white water comes at them like it’s personal, as if it’s trying to throw them off the black rocks. It’s a great spectator sport, and if you’re willing to be wetted with spray for long enough, you can see a man haul in a striped bass that measures from his shoulder to his ankle.

These aren’t just fishermen; these are wat­ermen, hardy as hell, with all kinds of know-how, and yet, you sense, the awareness of their own measure in the immense green scale. A few years ago, a local lobsterman was lost off the deck of a boat, 40 miles offshore, in the middle of the night. He survived by using his boots as floaters. He swam to a weather buoy he knew where to find and was picked up after 13 hours in the water. “I got two more days left in me,” he told the Coast Guard.

You wouldn’t mind having just a fraction of that resourcefulness and knowledge of the essentials, in these times. After all, what’s essential? Something that floats.

You’re lucky enough to live near a bay, a moody piece of water that alternates between riled and shiny as a sheet of silk. When you throw a rock in it, nothing gets thrown back; the silver water just covers up again peaceably. You shove off the sand in a fat little rowboat, and after 20 minutes of stroking, you’re off a quiet cut where you jig for fluke. But you find yourself attending more to the terns and osprey, the almost imperceptible noise of a wing cutting through air and the small racket of a gull dropping a shell on the rocks. You didn’t know real silence before, you realize. Whatever or whoever you think The Maker is, if any, maybe the task assigned you right now is this: You’re supposed to be still and listen.

Gierach says fishing at its best is a kind of “infiltration,” which suggests a certain softness of movement, a deference to the surroundings. Sitting in the chuggy rowboat, the sun kicking little diamond chips off the bay, the ospreys gliding in the distance, you understand a little bit of what he means. From the shore, the boat must look small. In the perfect quiet, something happens. You blend. And realize why you’re fishing.

The spouse says, “Do you have to catch a fish to write about it?”

You consider the question. “No,” you say.

Sally Jenkins is a columnist for the Washington Post.