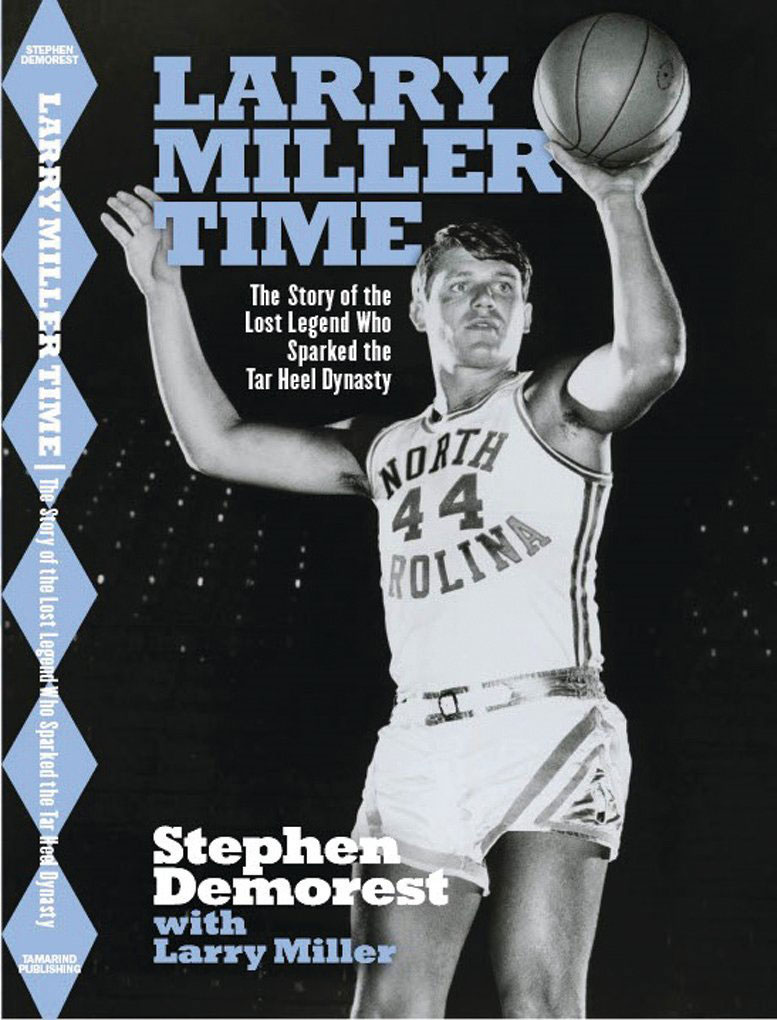 “Larry Miller Time” is not here to praise or to bury one of Carolina’s most iconic basketball stars. Instead this is a carefully researched book that goes into the project madly in love but refusing to let emotion erase the full life discovered.

The book is a project born of Beatlesque love mania as Nancy Curlee’s teenage crush led her to enlist Emmy-winning husband Ste­phen Demorest to document the seldom bumpy but usually exciting jaunt through the life of Lawrence James Miller. The basketball side was of course played in clear sight and the stats and awards easily and conclusively document his immense talent:

But interviews with contemporary coaches and players add texture to what we saw on the court. Miller was a natural athlete born with jumping ability and quickness, but the greatness layered on top of this genetic base emanated from maniacal bursts of training and re­lent­less intensity. He was a 6/4 guard.

George Lehman was amazed to see Mil­ler follow grueling three-a-day practices with fero­cious track workouts when both played for the Carolina Cougars. Dick Grubar marveled “there was nobody who could keep up with him on anything! He’d always be first. He’d run the hills postseason and he’d force himself to do things that killed a mere mortal like me—there’s no way. You’d be dead and he’d keep going.” A basketball cliché often heard at clinics is the well-worn “if you think you might miss, you will.” Based on clutch performance and player testimonials, Miller never, ever expected to miss any shot he could get off.

Coaches played a big role in Miller’s career and Dean Smith was as big a figure as would be expected of any star in the Carolina pantheon. Miller and his mother kept all of the many notes and letters Coach Smith sent over the years. This is one of the book’s main attractions as Miller’s stories help buttress all the too-good-to-be true stories about Smith. In November, 1988 Coach Smith was concerned that Larry was letting his body go, bal­looning to almost 260 lbs. Seeking to offer advice Smith sent a note: “Dear Larry: hear you have been in the area for a while and we have not had lunch together. Why not give me a call to touch base before the basketball season begins … I’m free any day next week for lunch!”

Smith carved out a unique exception for Larry that no other player got during Smith’s 26-year run as Head Coach. Dean had a rule that players had to go to Church on Sunday. On Monday players had to turn in the Church program for the service they had attended. Miller treated Church like the anti-beer so he got his pal Billy Cunningham to pick up one for him each Sunday. Miller did not like to lie so he finally came to Smith and announced he wasn’t going to Church and did not like pretending he was. He was thus granted his freedom from Religion while at Carolina.

Larry Brown was an Assistant Coach (1965-67) and is often maligned by current UNC fans perhaps because Kansas played such a big part in Brown’s life which leads to rumors of divided loyalties. But fans will be surprised to learn the role Brown played in ensuring that Charlie Scott remained in Chapel Hill after encountering freshmen ennui. Char­lie recounts in the book that “When I got out of class I went straight to the back of the Basketball Office and talked to Larry Brown. That’s the absolute truth; he was the only person I could talk to. If it wasn’t for Larry Brown I wouldn’t have made it through my first year at Carolina.”

Biographies are written because the subject has accomplished something that is judged to be of enough interest to sell books. But beyond the analysis of the public persona that fuels the book’s raison d’etre is the necessity to illuminate the subject’s life off-screen or away from the public eye or in Lar­ry’s case, off the court. This could be a difficult read for life-long Miller fans expecting off-court heroics to match the basketball accolades. Larry reportedly was in the unique position of challenging Wilt Chamberlain’s self-proclaimed record of 20,000. No, not points or rebounds, but the number of women taken to bed. An ad Miller placed in the early 70s says it all: LOST: Aluminum team suitcase containing a basketball uniform and personal property. Keep the suitcase! Keep the uniform! But please return the little black phone book to Larry Miller, Carolina Cougars, Greens­boro Coliseum, Greensboro, NC.” Larry lamented the loss of at least 100 girl’s phone numbers in LA alone. Times do change and what seemed very James Bond-like then might seem more Donald Trump now.

Larry’s off-court activity could not be sum­med up with just one all caps word like GIRLS. Another must also be included: BEER. Author Demorest should have applied for a grant from Anhesuser-Busch because it seems that every activity Larry ever engaged in was always followed by a beer. In another boost for brewers Larry has seemed to have downed a million beers or more with little ill effect. (kids don’t try this).

It would probably help in your enjoyment of the book if you are (like me) a fervent Carolina fan whose favorite player in the 60s was Larry Miller and whose undergraduate years at UNC perfectly matched Miller’s. I vividly recall watching freshmen shoot around in Woollen Gym and my initial reaction still resonates in my memory: wow, he can jump as high as he needs to. Larry had two go-to moves: the 18 foot lefty semi-jump shot and more importantly the drives to the lane marked by the spontaneous ability to twist and hang to convert improbable circus shots. As a lover of scorers and one-on-one moves the media-tagged “L and M” year of 1966 was actually my favorite Miller time as Bob Lewis and Miller had un-Smith like freedom to score by any means possible.